This past week I spent 4 days on Jeju island.

Jeju is the 9th province of South Korea and it’s biggest island.  It was essentially created a long, long time ago by volcanoes and is now known for its beautiful beaches, inactive volcanoes, lava rock everywhere and lava caves created previously by the volcanoes.

You can read more about the island HERE and a list of the top 16 things to do (a few of which I did) if you ever decided to visit.

Recommended, and I’ll tell you why

I joined a tour group over the Korean Thanksgiving Holiday, Chuseok

The organization of the tour was a little too ‘flexible‘ as they call it in Korea, for my comfort.  My entrepreneurial side is considering venturing into the tour group space here in Korea if I was to stay long term.  I see opportunity for money to be made.

Despite that, they did deliver on getting us a lovely hotel (In korea there are a few types of hotels, this one was called a pension) which was essentially a bachelor suite apartment – that happened to be on the fifth floor overlooking a beach and ocean from the balcony.

Due to the organizational lackluster I ended up leaving for a southern city, Wando on the Tuesday night in order to be on a ferry early Wednesday morning.  I found out later I could have easily left Wednesday morning but oh well.

Wednesday we took the ferry to Jeju island.  Lovely views along the way! 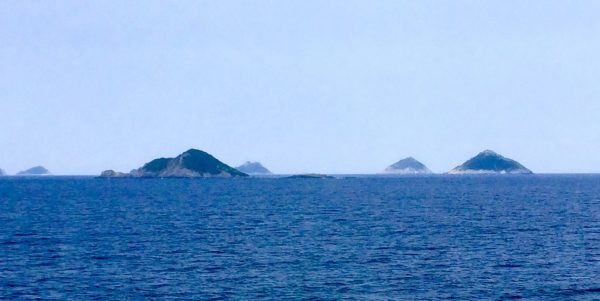 We arrived on Jeju Island around noon.  After a bit more confusion we bused over to our pension buildings.  It had been cloudy all day and to our dismay it began to rain as we were sorting out our rooms.  I lucked out by being placed with a friend from Seoul and two other women.  Stuck in a room with 3 not-unattractive women.. Things could have been worse.

Upon feeling settled, we headed down to the beach to drink and swim in the ocean.  Things were definitely starting to look up.  The night consisted of watching a sunset on the beach while eating gourmet hamburgers and consuming bottle after bottle of Soju and heading to a Noreabong (Korea Karaoke).

Friday morning, 2 of the roommates headed off on a tour after some drunken yoga on the beach and I got breakfast while waiting for my friend to get over her Soju hangover.  She wasn’t able to beat this one – ask any foreigner in South Korea and they have a great respect for the severity of the Soju Hangover.

Since we only had a few days on Jeju Island – and keeping in the back of my mind that anywhere I go in South Korea could very well be the first and last time I ever find myself in that particular spot – I refused to miss out on what I previously had my mind set to accomplish.

The trip started out a bit shaky; being unfamiliar with the buses on Jeju Island, and the information Google maps gave me was a little off based on which buses were running that day.  I ended up just grabbing a bus, luckily it brought me to the road that lead to the Lava caves.  I pre-gamed the caves with a 2km walk to the UNESCO site.

The entrance to the caves are a set of steep stairs down into a large hole.  It immediately gives off an eerie vibe.  Thankfully it was midday and the caves were busy.  As soon as you walk down the steps it drops in temperature to a damp coldness.  The caves are many km’s long and they haven’t even been fully explored yet so only a small section is open to the public.  Apology for the rough pictures below.  It was a bit more exquisite in person. 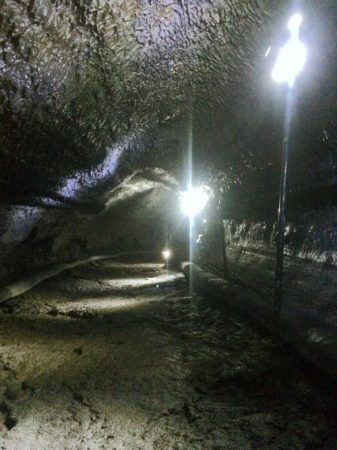 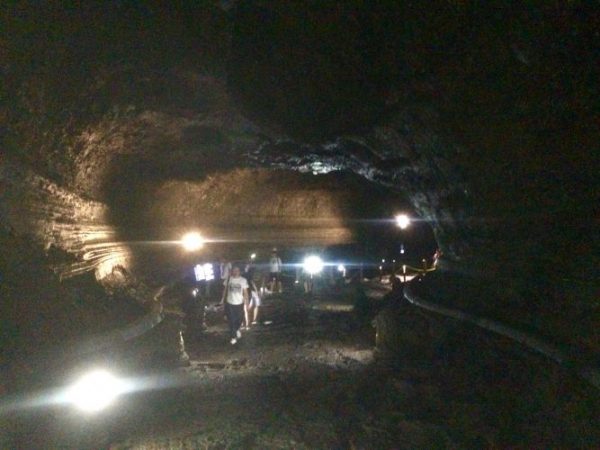 The cave experience took me about two hours, and with the original walk to the cave entrance I was sweaty, hungry and tired.  Thoughts of drinking on the beach were beginning to tempt me.  On one hand I don’t have a beach anywhere under an hour drive from Gwangju and fall was coming, but on the other hand I thought to myself, I may never come back to Jeju Island in my life.

Off to the Sunrise peak it was. 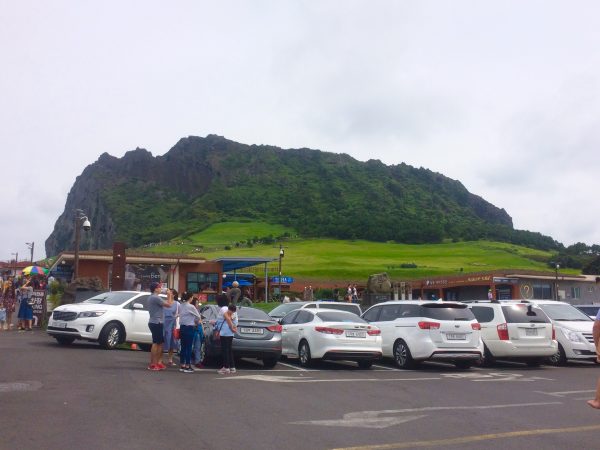 I took what I thought was the correct bus to the small town at the mountains base, but when the bus passed the turn off I knew I had taken the wrong one.  I got off at the next stop and walked until I was able to waved down a taxi to take me to the town (about a 15 minute drive.. Glad I didn’t walk).

The town and mountain were even busier than the caves.  Though the walk up delivered beautiful views and the peak even more so.  Again I was overwhelmed with that feeling of gratitude and disbelief that I am here in Korea.

The bus experience home was worse than to the mountain.  I got on the wrong bus and was kicked off shortly after as the driver tried communicating to me that I was in fact on the wrong bus (some translation took place between myself, the driver and another English speaking Korean rider).

I ended up waiting another hour for the next bus.  Unimpressed that the ride home was over an hour added to that wait.

I got back, to find my friend still in bed at 5pm from the ever-feared soju hangover.  We drank, swam in the ocean and just relaxed on the beach for the remainder of the day.  It was an early night as everyone was tired and had a long day ahead the following day.

Saturday morning my two roommates set off early again on tours.  My Seoul friend and I decided to hike Mt. Hallasan.

It was a full day including a 2 hour bus ride each way and a hike totaling 6 hours up and down.  we didn’t go nearly as high as we could have but since it was a foggy day where we went was enough.  The views were even more amazing than the day and mountain before. 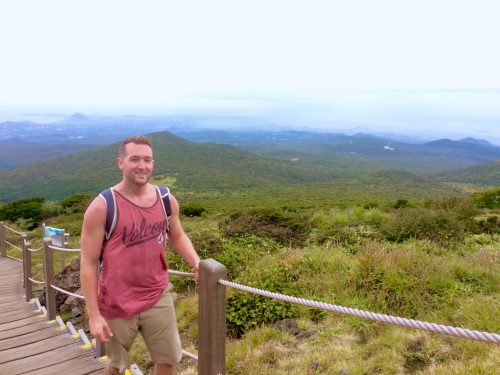 On the bus ride back we were contacted by a roommate to let us know that there was a typhoon coming and we would be leaving on Saturday instead of Sunday.   All tours would be cancelled on Saturday, which for Ms. Seoul and myself meant a cancelled deep sea fishing trip.

Saturday evening was spent over a nice Italian dinner.  We the got our last session of vacation drinking in and a late night swim in the ocean.

Saturday, our last day now due to the typhoon was spent on a tour around Jeju Island to some museums (an art museum, sex museum and science museum) before boarding the ferry to head home.

What this trip taught me was that if you have an opportunity to experience something new, always jump in and never look back.  Regardless of what obstacles stand in your way.  Despite being left alone, tired and confused.   I still managed to do everything I had planned to do on Jeju Island.  Within my control.  Looking back and knowing what I know now about each of the sites I visited, I would be so angry with myself had I been robbed of seeing those sites.

No regrets; always trust your gut and do what you feel you should be doing.  Whether it’s traveling, starting a business, a new career, starting a conversation with that beautiful stranger or whatever.  No regrets.