The benefit of living in South Korea, is many places that would take a day or more of travel and thousands of dollars worth of flights,  are now mere hours and hundreds away.

I had a few holidays over New Years and after much deliberation I chose a small southern Japanese island called Okinawa.  Cheap flights and swimming friendly weather sold me.

Now here I am sitting in a restaurant along the Southeastern coast of the island drinking the local Orion beer and enjoying a bowl of their famous noodle dish, Soba.

The trip started off a little rocky as I arrived to the bus terminal in my city, Gwangju, to find all the buses to the airport sold out until 2pm.  I had a 4pm international flight and it takes about 3 hours to get to the airport near Seoul from Gwangju.

Luckily I was able to jump on a bus leaving Gwangju just as I arrived to the bus terminal that brought me to a city an hour away from the airport.  A $40 cab ride later and I was at the airport.  To add insult to injury, my flights ended up being delayed.

I finally touched down in Japan hours later than expected and took a cab to my hostel.  The weather was fair even for 9pm.  After arriving to my hostel I walked around the neighbourhood in a t shirt.

I opted for a true backpackers experience in a cheap hostel.  A cockroach climbing on the hall room wall and a toilet out of order is what I found upon arriving.  I knew it was going to be an adventure.

Friday morning I woke slowly and got myself together to explore a few parts of the island.   After slightly familiarizing myself with the bus system I grabbed a bus and headed off to my first stop.  An ancient prayer site called Seifa Utaki. 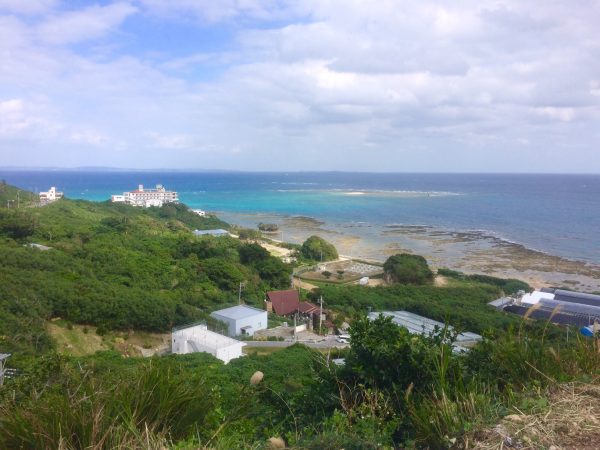 It was an area on the top of a hill in a bushy – almost jungle like – area that had large crater rocks scattered about.  The whole area was beautiful with a calming and special presence to it. 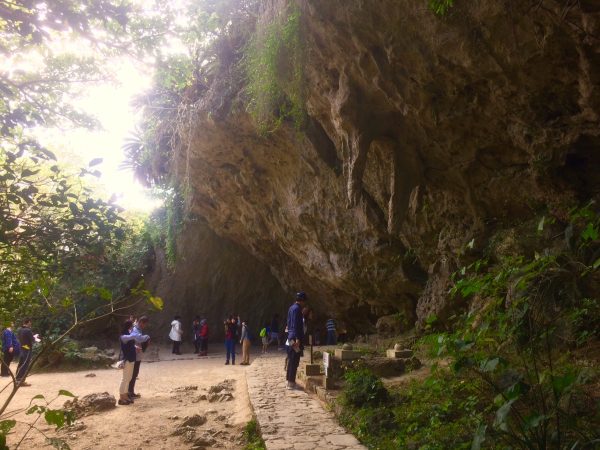 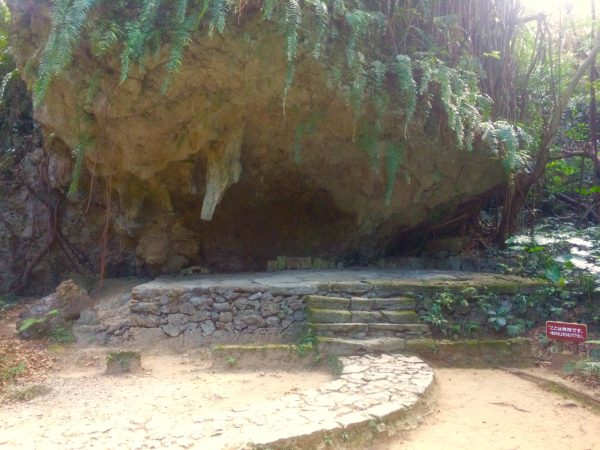 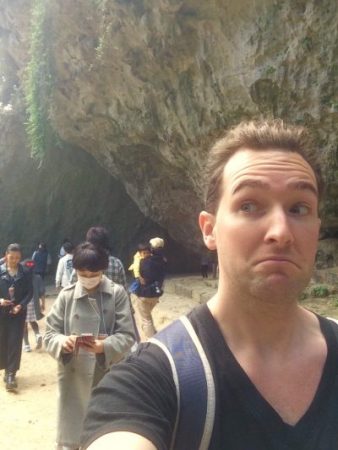 After the Soba and liquor buzz, I headed off to a castle a bit more northern up on the island .

When I got off at my bus stop I still had a few KMs uphill to walk.  After a good while and hike, I began to feel a little lost and realized I had passed the entrance.  I came back to find the fee was the equivalent of $50 CDN. So I decided to scrap it.

As I was walking back disheartened, is noticed a make-shift path just off the road.  It lead into the bushes towards the castle – which was on a hill.  I wondered if this would lead me into the castle grounds.  I decided to chance it.  To my delight it did bring me right into a back entrance to the castle.  This back path also delivered a few beautiful views of the coastline.  I had to hop a few ‘keep out’ fences to get in.  Sorry, Japan.

It was totally worth it.  See photos below. 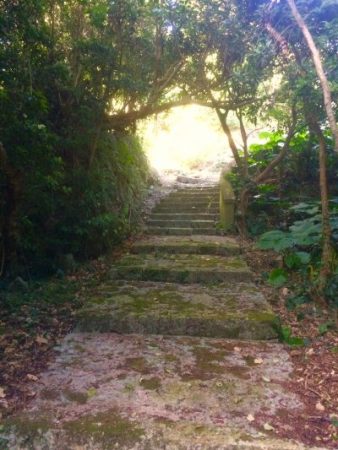 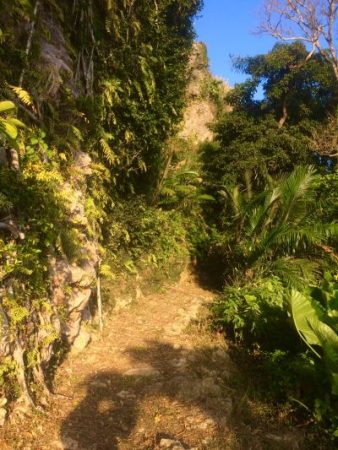 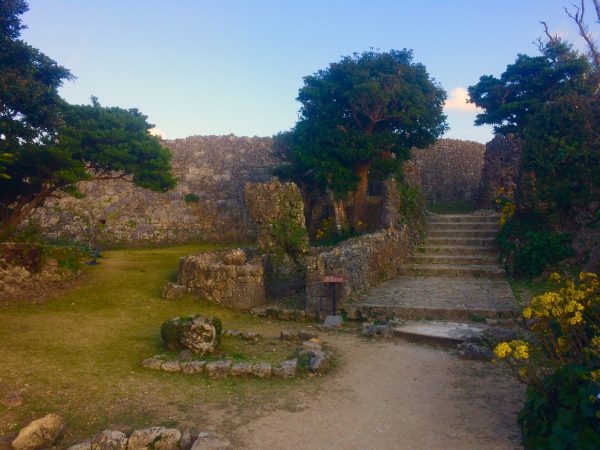 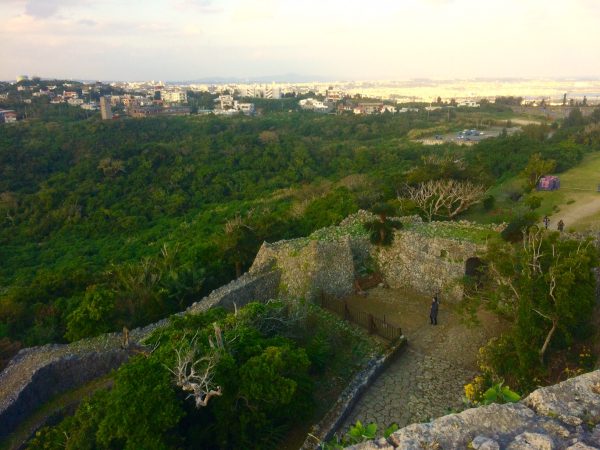 After exploring the castle and retreating back through the bushes I walked down to the bus stop. My next stop was a town called Chatan.  It was located in the middle of the island and had a section called ‘American Village’.

The whole area was  lit with Christmas lights.  It was a sight to see.  I was able to cross one of my ‘to do’s‘ of my list by having fresh sushi.

Fresh Japanese sushi, made right in front of me.  No doubt the best sushi I’ve ever had. 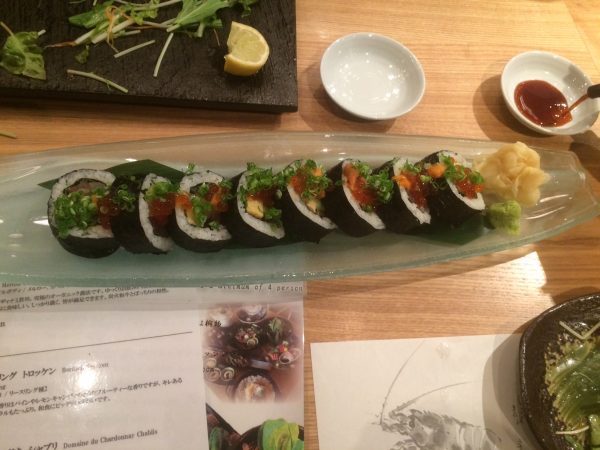 Saturday started a bit slower, and later than Friday.  I got a few ideas of things to see closer to my hostel in Naha from some other travelers.  After grabbing a coffee I set out wandering the streets.  Shortly after I found the coastline close by and followed it until I found a beach, where those same people were sitting. 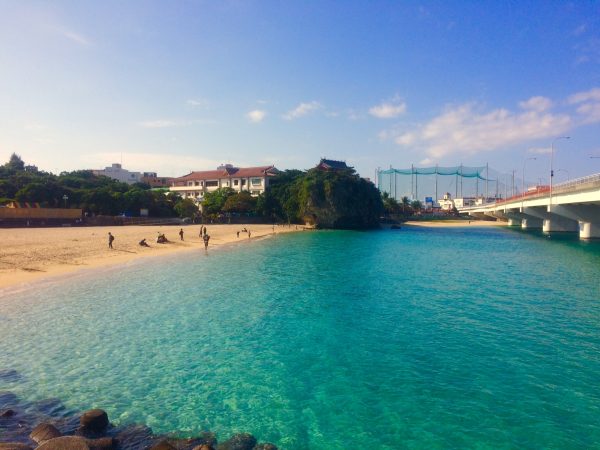 We shot the shit for an hour or two and swam in the ocean until parting ways as they had a tour to catch.  I wondered some more until I found a garden style temple and outdoor market.

Upon leaving the market I found another temple and they seemed to be setting up for New Year’s celebrations.  In Japan New Years is more of a religious holiday.  After walking around that temple I found some food and ate it at a nearby garden. 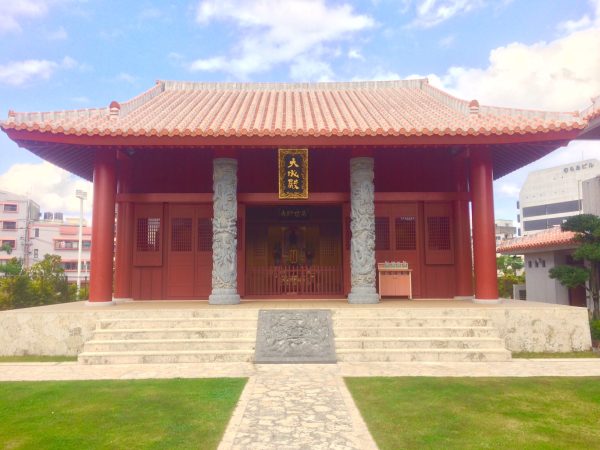 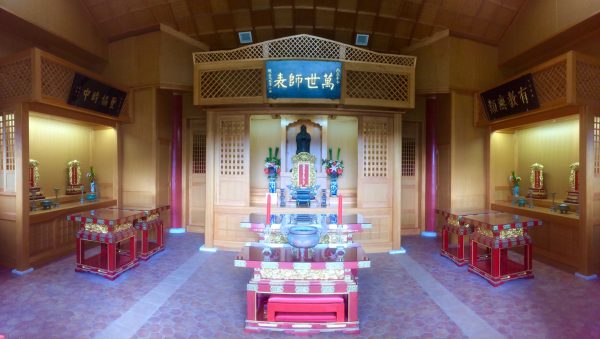 Hotto Motto for anyone looking for great cheap food on the go in Japan.

Upon finishing my lunch I found yet another garden.  Named Fukushein and it was absolutely spectacular.  Filled with little temples and paths surrounded by garden, it took my breathe away.

I sat in one of the temple-like structures and meditated for awhile.  I literally reached a state of flow from being in there.  Best 2 dollars I ever spent. 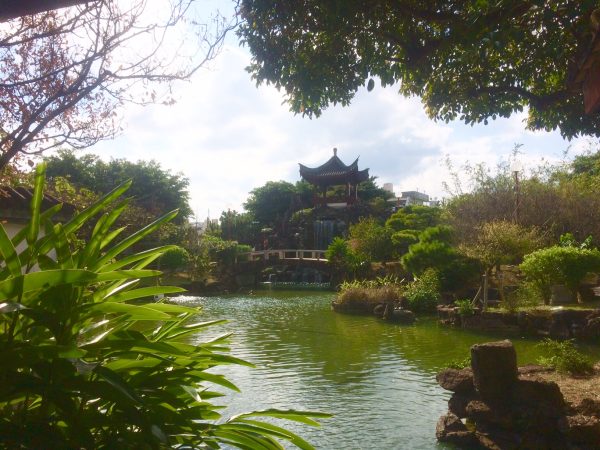 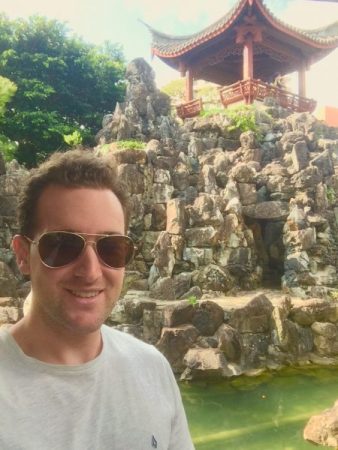 After the garden I took the long way back to my hostel for a little rest and reflection on solo travel.

Japan has over delivered so far.

Saturday evening the hostel was bumping with all the guests drinking and getting better acquainted,  it being New Year’s Eve.  Eventually I left with the group I had met earlier, in search of the downtown market by the beach.  We rang in 2017 along the beach below a large temple.

I set my alarm for earlier than I normally would have on January 1st.  I had made plans the evening prior to explore a major castle in Naha with the group I’d attached myself to.  It proved to be well worth the early morning.  The castle was bustling with sight-seers and there were special ceremonies all day for us to watch. 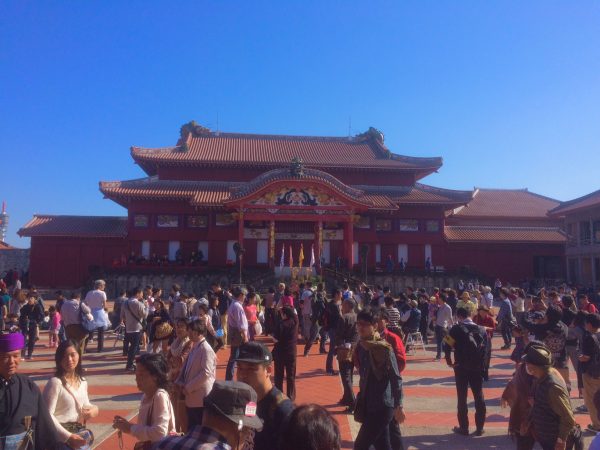 After a few hours at the temple, and the the temperature a warm +22 without a cloud in the sky I set off for an afternoon at the beach with a few of my new traveling partners.

I hadn’t expected to even be able to swim over this trip so the consistent sunny and warm weather was a real treat.  We spent all afternoon drinking, eating and swimming on the sandy beach.

The non-stop of sight-seeing had began to catch up to me.  I ended Sunday night a little earlier after returning to the beach market for some street food. 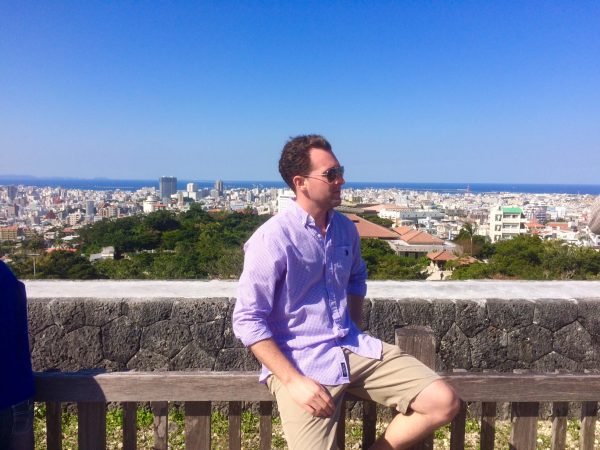 I woke to bid my new friends safe travels – as they were headed to the northern part of Okinawa and my flight was scheduled for earlier afternoon – and pack up to leave for the airport.

Thankfully I arrived considerably earlier for my flight, as I spent longer than anticipated looking for my gate.  Which required a poorly labeled shuttle bus from the main airport building.

The remainder of the day was spent flying, and busing while re-reading the ‘4 hour work week’.

I want to take a moment to complain about the cost of transportation on the island. The buses cost as much as taxis on the mainland and a taxi ride across the island – a little over 100kms long – would cost you over $150 CDN.

Aside from the transportation costs, Okinawa is beautiful.  It’s a comfortable +20 degrees in December and the island is overflowing with lush green plant life.

The buildings and cars are all mostly older, reminding me of what Panama, Columbia or Cuba must look like.

I am unofficially dubbing Okinawa the Hawaii of Japan.

There are beautiful beaches and smaller islands surrounding Okinawa as well.  Known for diving and whale watching.

All in all, I’m told it’s a lot slower than the mainland which I haven’t visited yet.  But in my opinion it’s definitely worth the trip.