4 Canadian Marijuana Stocks to Keep Your Eye On in 2018

Legalization of recreational marijuana use is penned for July 2018 in Canada, naturally marijuana has been a hot topic around the country – and the world –  lately.  For the last few years stocks of Medical marijuana companies have been on fire.  And they aren’t showing signs of slowing down.  So many people now use marijuana for various different purposes and spend their time trying the best tasting weed available to them. Therefore, the sales of marijuana are only going up!

The mere promise of legalization.  The ever changing landscape of regulations.  And many companies still proving to show profitability makes this a risky industry to be investing in.  As an array of companies flood into the space, it’s hard to know which stock to put your hard earned dollars into.  With many realizing 100% gains over the last year, it is certainly not an industry you want to be overlooking.

Following are a few companies I am personally invested in, or plan to invest into, in the near future.  Here are 4 marijuana stocks to keep your eyes on for 2018.

Canopy is the gold standard and granddaddy of all Marijuana companies.  It was the first commercial company to go public and has one of the largest grow facilities in the world.  They have a wide array of partners such as Snoop Dogg and the makers of Corona among others.

WEED has been growing at an exponential rate as a company, acquiring multiple smaller companies to expand their services and offerings.  They do it all in terms of marijuana from production, distribution and derivatives.

WEED is the bitcoin of the marijuana world.  While its current price is fairly higher than many other companies currently.  With such a strong foundation and wide array of offerings and capabilities, it would be unwise not to have some of this in your portfolio.

Canopy Growth Corp has delivered incredible results for my portfolio over the last year.  My only regret is not buying more, and not selling some this past year.  I suspect today’s price will be considered cheap once legalization is appointed in Canada.

See below the results of the past 2+ years.

Another large medical marijuana company from Ontario, Canada.  Aphria is another monster you should be keeping an eye on.  Aphria is another Licensed Producer of plants and oils.  While they don’t have the production size and extent of services as Canopy (WEED).  They have a large medical customer based and recently have inked some large deals which should yield continued growth.

Some noteworthy deals include one with Shoppers Drug Mart for to supply for medical sales, and they are currently preparing to move into the recreational market as well.  Another deal includes a recently signed  $100 million dollar deal with a security company.  All of their product is grown with sunlight in greenhouses which has an environmentally friendly tone to it.

I haven’t personally invested in Aphria to date, though looking at the chart below I wish I had kept a closer eye on it.  The Profit over Equity ratio suggests Aphria is highly over priced, but with these deals and the potential for the recreational market in Canada, I am still considering buying soon. 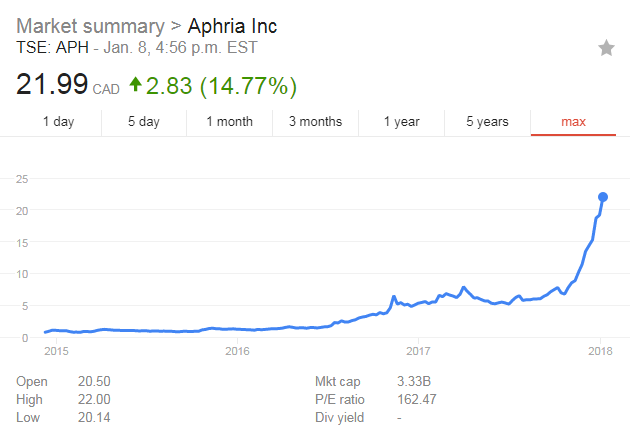 Lots has been happening lately with Aurora, they are working on some new partnerships and are currently involved in a hostile takeover with another company, Cannimed.  They are another Licensed producer, though this company hails from one of the cannabis capitals of the world, British Columbia.  They currently don’t have nearly even half the size of grow space as Canopy Growth Corp, but there are many articles floating around suggesting Aurora is running for the #1 spot in the industry.

Again we see a serious jump lately in the price.  The near future could spell serious ups or downs for Aurora depending how the partnerships and this take over turns out.  But regardless, increased publicity will attract new investors and as they are also within the top few companies by market cap, Aurora could be one of my next purchases. 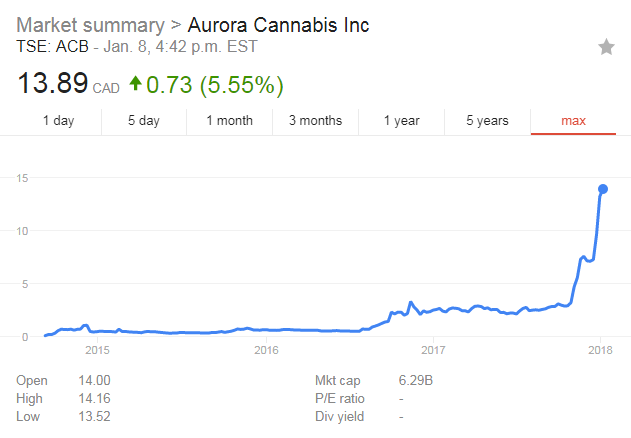 I was downtown a month or two ago in my hometown city and was walking by one of National Access’s 15+ locations in Canada.  I decided the pop in and pick the brain of some employees on their thoughts on the upcoming legalization.  After a lengthy and informative conversation the manager mentioned they had recently gone public.

After doing a bit of research on their company, seeing how they operated their location and knowing some of industry related companies they were related to I jumped into a large position later that afternoon.

Over the following weeks it was pumped and dumped.  But since has started to recover steadily.  I have already sold for a profit, but have a buy order set for a certain price to reenter.   I see this company definitely providing large gains over the next few years.  They have a strong business model and their CEO is an ex RCMP sergeant.  Have your opinions of that, but he will be an asset to growing the stock of this company.  A definite buy in my opinion. 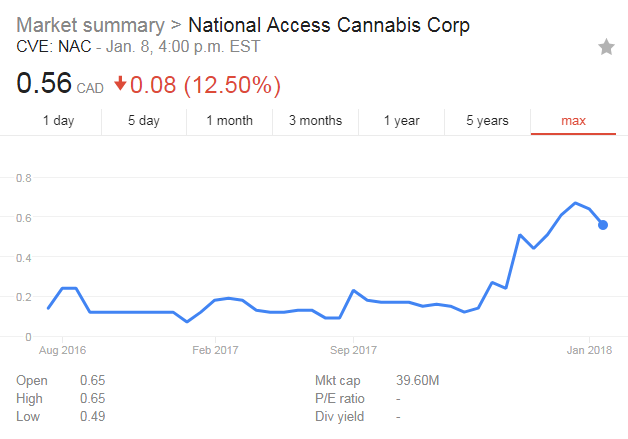 These are only a few of the many cannabis stocks currently on the market, and many others have also shown considerable gains.   There are many stipulations in this industry, extra due diligence is required for investing in this market.  Another tip, its speculated that many of the smaller companies may get merged into larger ones in the near future.  Something to consider when buying.

I am not a certified financial advisor and this is not financial advice.   This is merely a partial illustration of the marijuana industry and some stocks that have been profitable for myself.  Future gains are not guaranteed.

Do your own research and best of luck in your personal wealth creation!