The adventure to Hong Kong began with a 9pm bus ride from Gwangju to Incheon.  Incheon is a smaller city not far from Seoul.  The international airport;  Incheon International Airport is just outside the city.

Now you might not think there is a difference of busing to Incheon itself and the Incheon International Airport, but there is.  Tickets were sold out so far in advance directly to the airport, that I had to bus to Incheon the city and then cab to the airport – a $40 ride on top of my $30 bus ticket.

I began to gather it wouldn’t be a cheap trip.

Now choosing the 4am flight to save some bucks and only being in Hong Kong for a few days, I knew ahead of time sleep would be put on the back burner this trip.  As expected, when we touched down in Hong Kong around 8am, we got directly into sightseeing.

Our first mission was to figure out transportation.  Cabs, metro, buses.. What was going to be the most time and cost efficient option.  We found by investing in the local OCTOPUS CARD we could efficiently travel by bus or train during our stay. 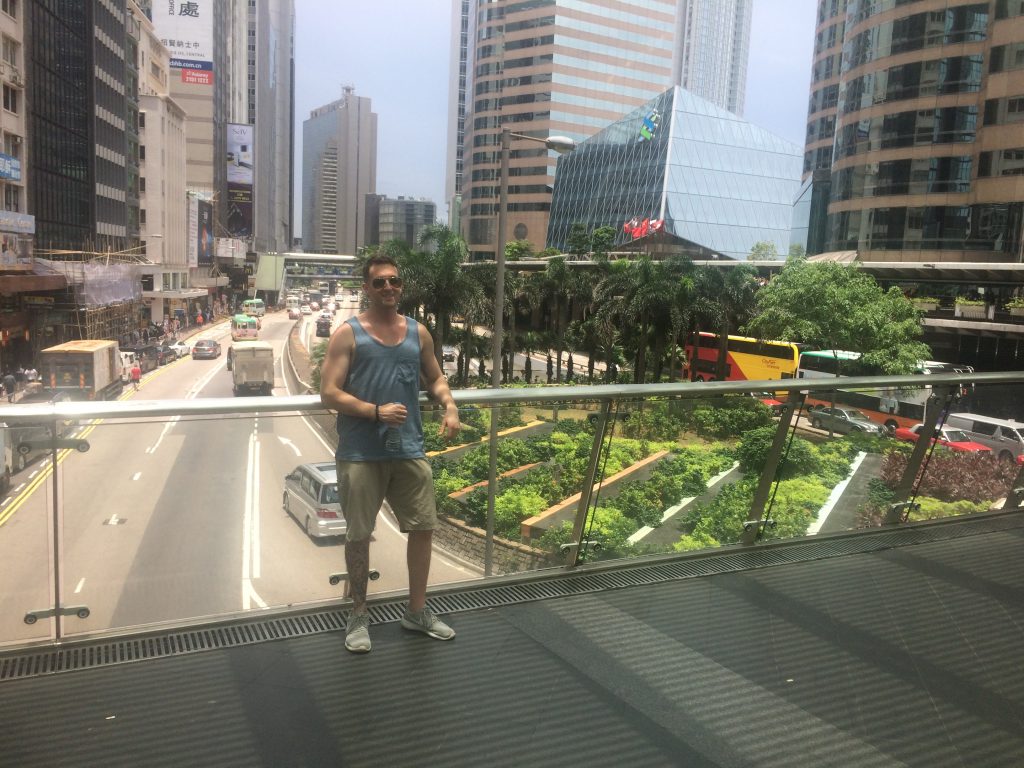 The octopus card is 150 HKD – about $25 CAD – which includes HKD100 in fare and HKD50 return deposit when you leave.  You can use the card to pay for bus, train and food even at stores.  The card is essentially free if you return it.  It’s a must get for visiting Hong Kong.

We had a rough itinerary for our trip.  Our first landmark to see included traveling to Lantau Island for a gondola ride and to see the famous Tian Tan Buddha.  A giant Buddha statue.  Ironically this island and the sights were an hour trip back to where to airport is.  We eventually found our way back and took the gondola (170 HKD each way) to the site of the Buddha. 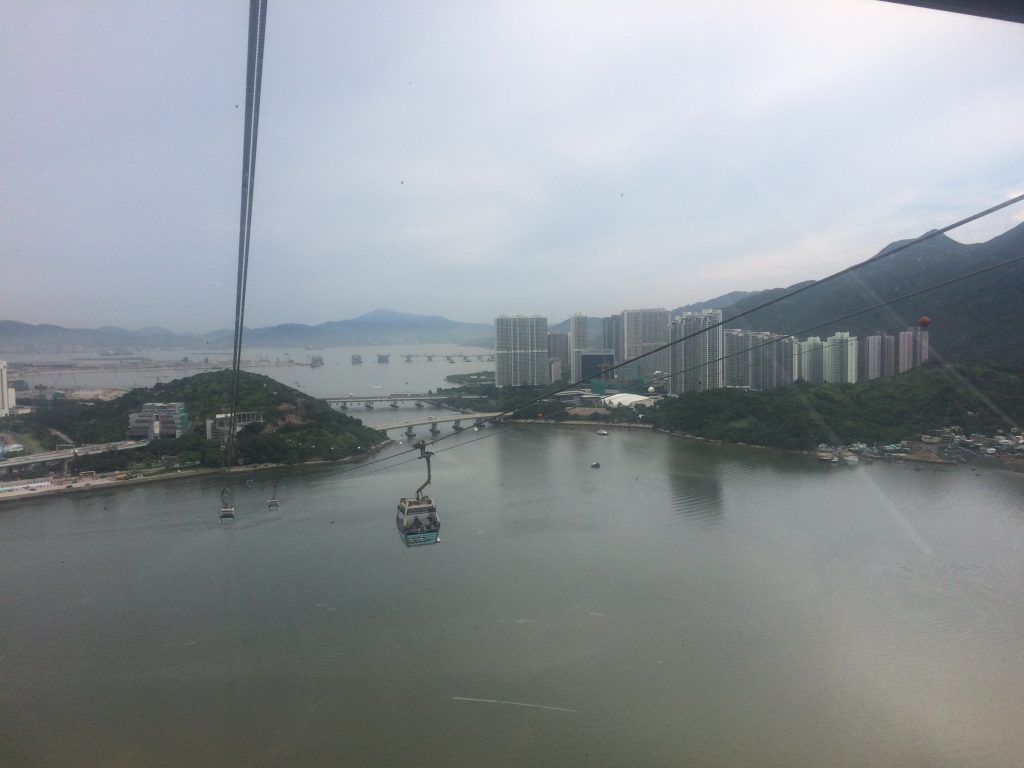 For those inclined to save a buck, you can easily bus to the site, with almost as good of views as the gondola. For a tenth of the price.  We took the bus back to the train station after seeing the Buddha. 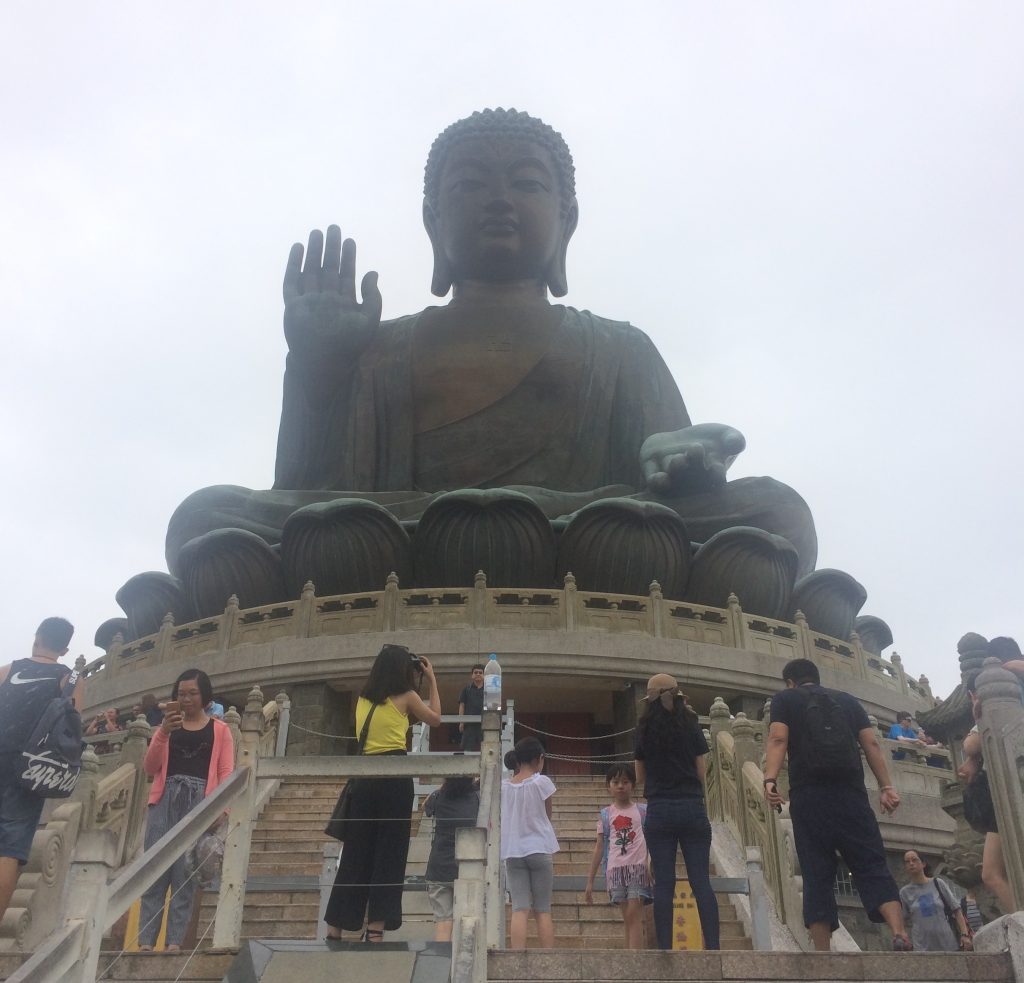 After the buddha we sat down in the souvenir market nearby and grabbed some food from one of the many vendors.  After that we bused back to Hong Kong Island where we were staying to take a nap and relaxed before heading out to the International Commerce Centre building. 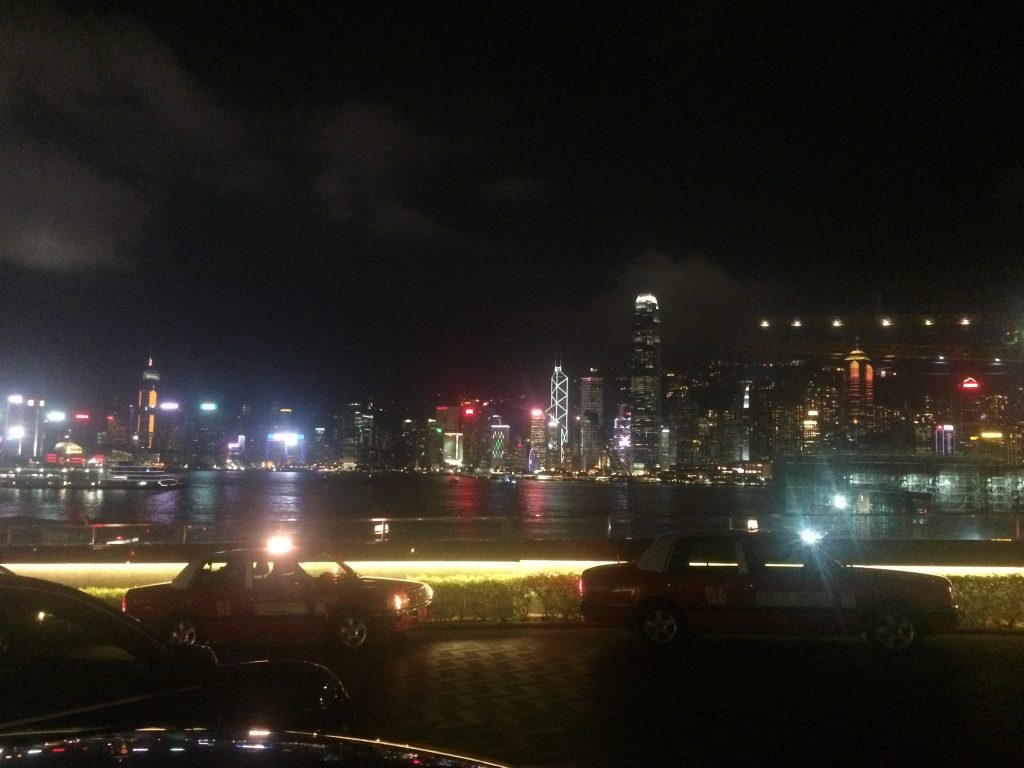 The ICC is the tallest building in Hong Kong, an astonishing 118 floors.  Now there is an observation deck on the 100th floor called Sky100.  Our original plan was to visit this, until we found out it costs 170HKD (~$30 CAD) entrance fee.  We also read online there’s a bar on the 118th floor with no cover – They make up for that with drink prices. 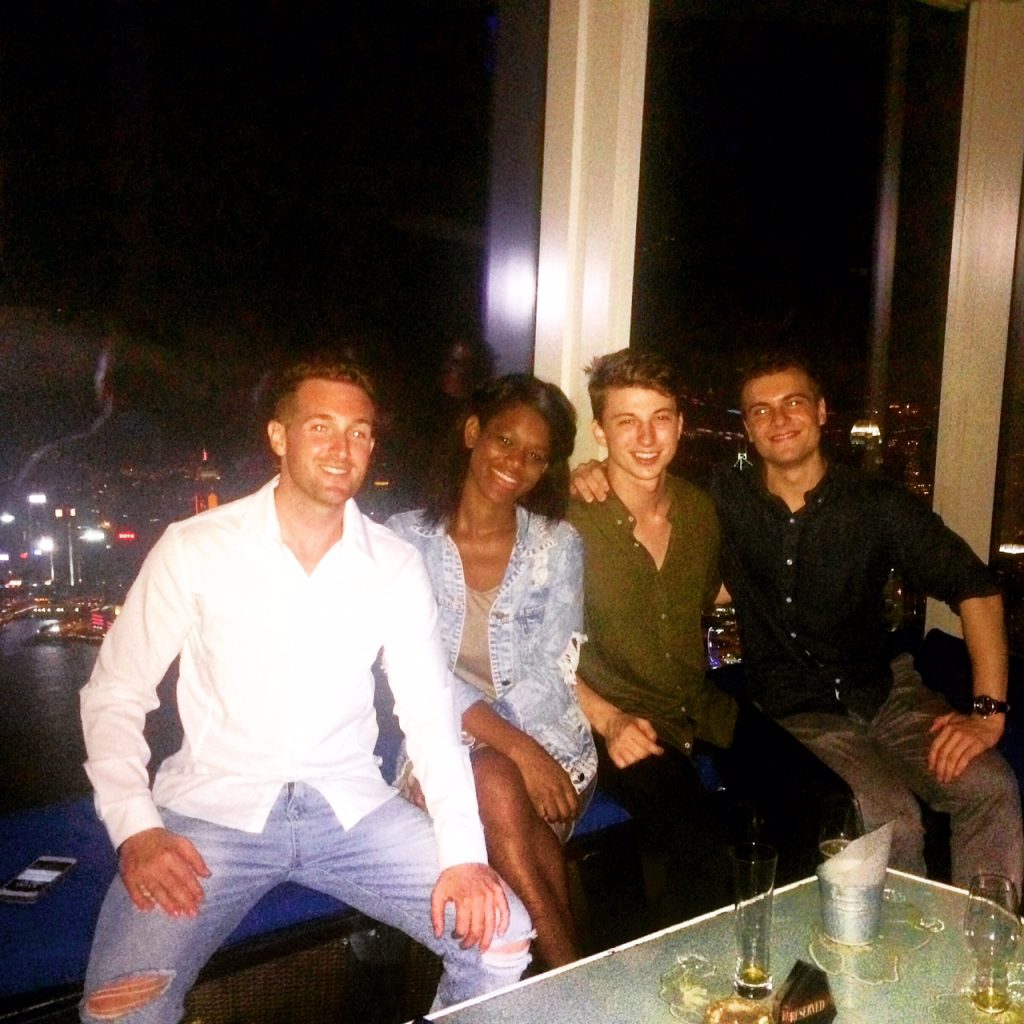 Fancying a drink over a ticket stub, we chose the bar.  On the way up we met a few guys from LA; one who was interning over the summer in Hong Kong and his buddy who was visiting.  We ended up drinking with them all evening and making plans to see Macau together in the following days.

The next day we caught up on some much needed sleep, and had a later start to the day.  We ventured off early afternoon just on foot towards Victoria Peak.  Victoria peak is probably the biggest cliche spot to visit in HK, but as I’ll explain it’s well worth it!   The peak is the tallest on Hong Kong island, and you take an old style tram to the top.

Before the tram and peak, we decided to grab some food.  Dim Sum is famous in Hong Kong so we figured we would cross that off our list right now as we came across a restaurant claiming some of the best Dim Sum in Hong Kong.

It was a tiny hole in the wall place but extremely busy.  We were seated at the same table with two other people, which I thought was odd being from North America, but I guess in a tiny country with tons of people.  That’s the way to roll.  Eventually the two people left and were quickly replaced by two American looking girls.  We said our polite hellos as we would be sharing the table.

I noticed their accent being Texan and had to strike up a conversation as one of the guys from the night before was from Texas originally.  They sure enough were and had just arrived in Hong Kong.  We chatted some more, exchanged information and added them to our Macau entourage for the next day.

After the meal we set off again on foot to see some more of the city and find the tram.  We stopped in a few gardens and took tons of pictures as we got lost along the way to the tram entrance. 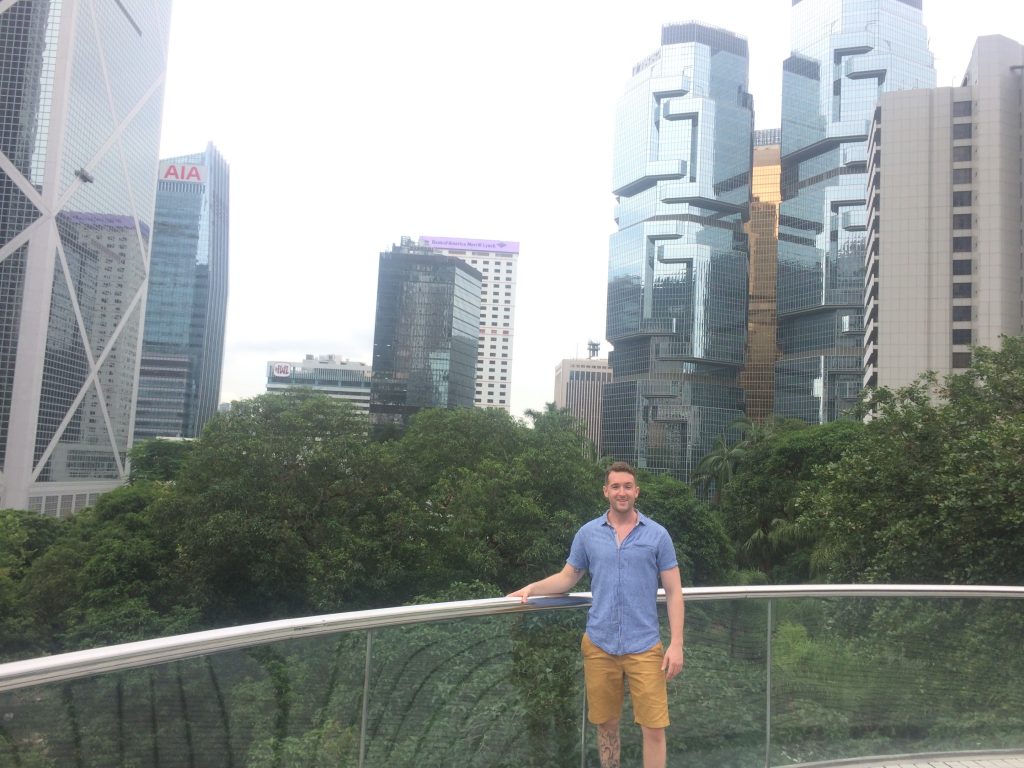 It was about 3pm by the time we arrived, and the tram line was huge.  We somehow were able to cut the line and jump way ahead, I think we still waited for around an hour though.  The tram was a very steep 10 minute ride up the mountain.  I believe the tram cost about 140 HKD (~$20 CAD. There are also buses with similarly scenic routes for maybe 20 HKD). 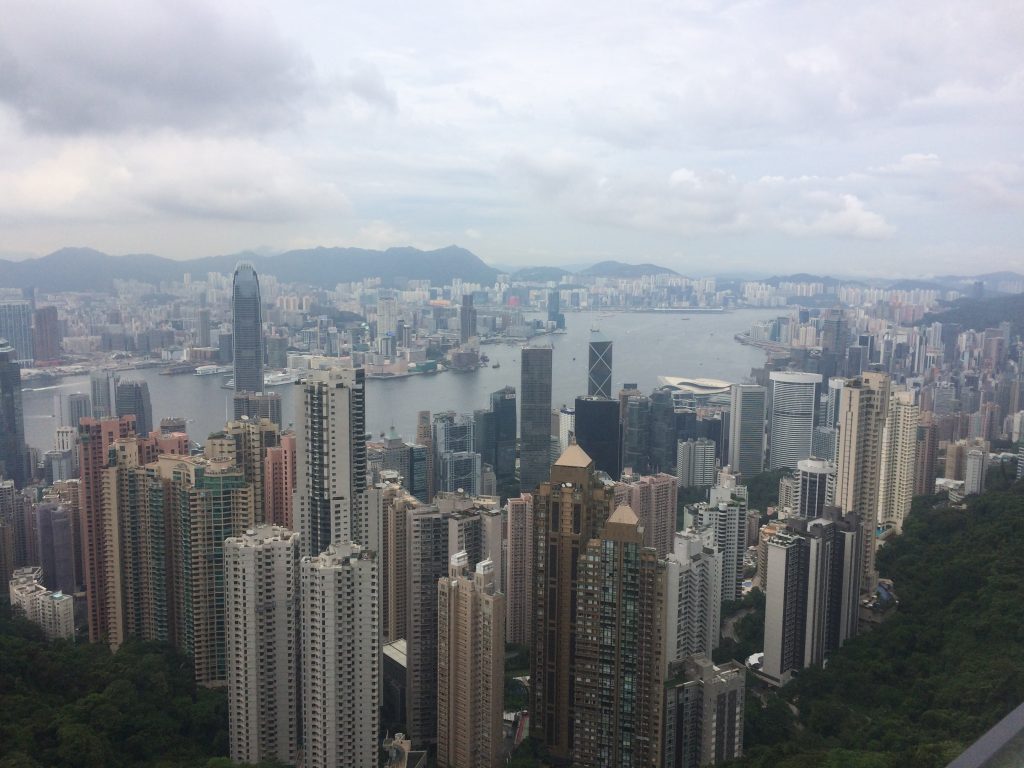 The top of the peak was worth every dollar.  We could see all of the main Hong Kong metropolitan area.  As well as the other side of the mountain which was more Rural Asia and had smaller islands in the distance.  We grabbed some more food from a nice western lounge before setting off on the bus back to our hotel.  Again we took a nap before heading out to the main downtown area of Hong Kong; Lan Kwai Fong.

LKF is a strip of bars that are very open concept and inviting for bar hopping.  I’ve been to Itaewon and Hongdae in Seoul which I thought was insane.. But LKF takes the pie.  More bars, much more open concept and way more people.  It was absolutely crazy.

To put it in perspective, there’s a 7/11 right in the thick of the strip and it’s the most profitable 7/11 in the world.  A local nickname for the establishment is ‘Club 7/11’ as they sell beer there.  Cool countries actually allow you to buy booze from convenience stores and drink in the streets.  Needless to say it was a late night.

Friday: Macau, the Vegas of Asia

Due to decisions made the night previous, a lot of my Friday was spent in bed unfortunately.  Though I did get up to explore a nearby neighborhood that had a street famous for fashion shops and artisan food.  I had a nice 3 course lunch meal at a cute little Barcelona inspired restaurant, but couldn’t hack being out of bed for long, so I had to trudge back to the airBNB.  After a few more hours of rest I got ready to head out with my travel partner to meet the two groups of guys and girls we had met to take a ferry to Macau.

Macau is another island off the mainland from China which is technically it’s own country.  It was an hour by ferry away from Hong Kong.  For those of you unfamiliar with Macau – I certainly was prior to arriving – Macau is meant to be a recreation of Las Vegas.  It’s full of the same Casinos; MGM, Venetian, etc. 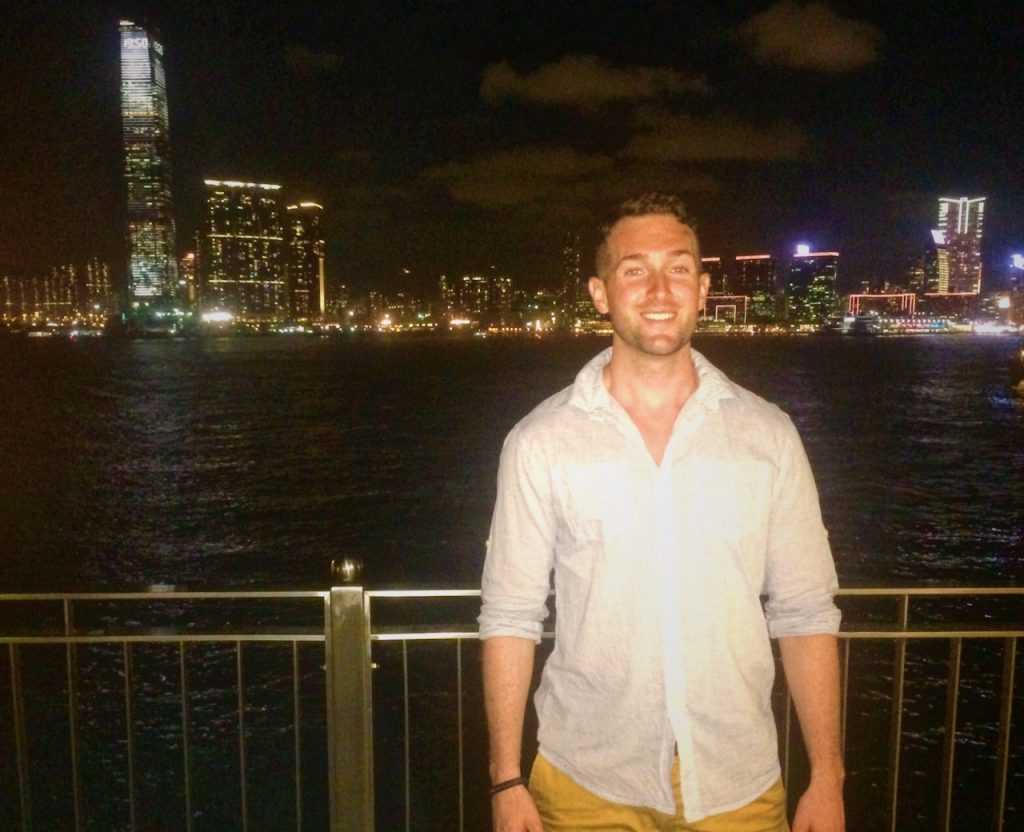 I’ve never personally been to Vegas but a number of the people I was with had been and they said the Casino’s were even more elaborate in Macau.  But the weird thing was, the city was so empty.  There were barely any people on the streets, and very few in the casinos.  People here were much more serious about gambling and didn’t even really drink while they played.

It was intriguing and the sights were awe inspiring.  After a few casinos we dropped by a club, Cubic, which claims to be the best bar in all of Macau.  We didn’t visit any other clubs, but this bar certainly was wild.

Ferries are NOT 24 hr in Hong Kong

Around 4am we decided it was time to call it a night and headed back to the ferry.  Only to find the 24 hour ferry rides we were relying on, were actually a myth.  And the next ferry wasn’t until 8am.  We had 4 hours to kill.. And we were already wiped.

When in Rome.. or Macau?  We thought.  And headed off to find another club.  The only bars we could find were strip clubs and the cover charges didn’t sit right with the girls so we went back to the ferry to wait out the first ferry back to Hong Kong.

At this point I started sleeping, and really only remember arriving back to Hong Kong and saying our goodbyes.  We eventually made it back to our airBNB around 10am and crashed instantly.

Saturday: Beaches in Hong Kong and a return to Lan Kwai Fong

I awoke around 3pm, and was determined not to waste as much of the day as I had previously on Friday.  My travel mate was moving even slower than me so I rolled out solo to ride the intercity tram around. I did that for about an hour and a half seeing some different parts of the city before returning.  She was up by that point and we headed off to a beach to catch a swim and the sunrise.

When I think of Hong Kong, I definitely don’t think of beaches.  But seriously they were not bad.  The water was super warm and the views of islands and yachts in the distance were appeasing to the eyes.

By the time we returned from the beach, it was nearly ten.  We had another early AM flight to catch.  At this point, we had seen a lot and done even more.  Taking into account the serious lack of sleep over the previous few days and the early flight ahead, a responsible human would have gone straight to sleep to and woken up to head to the airport.

I am not a responsible human nor do I claim to be.  So I headed back to Lan Kwai Fong to do one last round on Hong Kong.  I met some locals and was introduced to more spots in LKF and the surrounding area.

I made it back to the AirBNB just in time to pack and grab a cab.  We made it on time, caught our flight and arrived back in Korea for noon.  It all seemed but a dream.

Is Hong Kong a cool city to visit?

Hong Kong is very distinct from Seoul.  The buildings are taller and more impressive from an architectural standpoint, also the city is much more infused with trees, bushes and flowers that are much more exotic than what is in Korea.  The city is as busy as Seoul but everyone seems so much more happy and relaxed.  The amount of English everyone speaks and the diversity of foreigners is refreshing but almost intimidating after spending so much time in Korea.  It’s an amazing city, and one I definitely expect to return to. 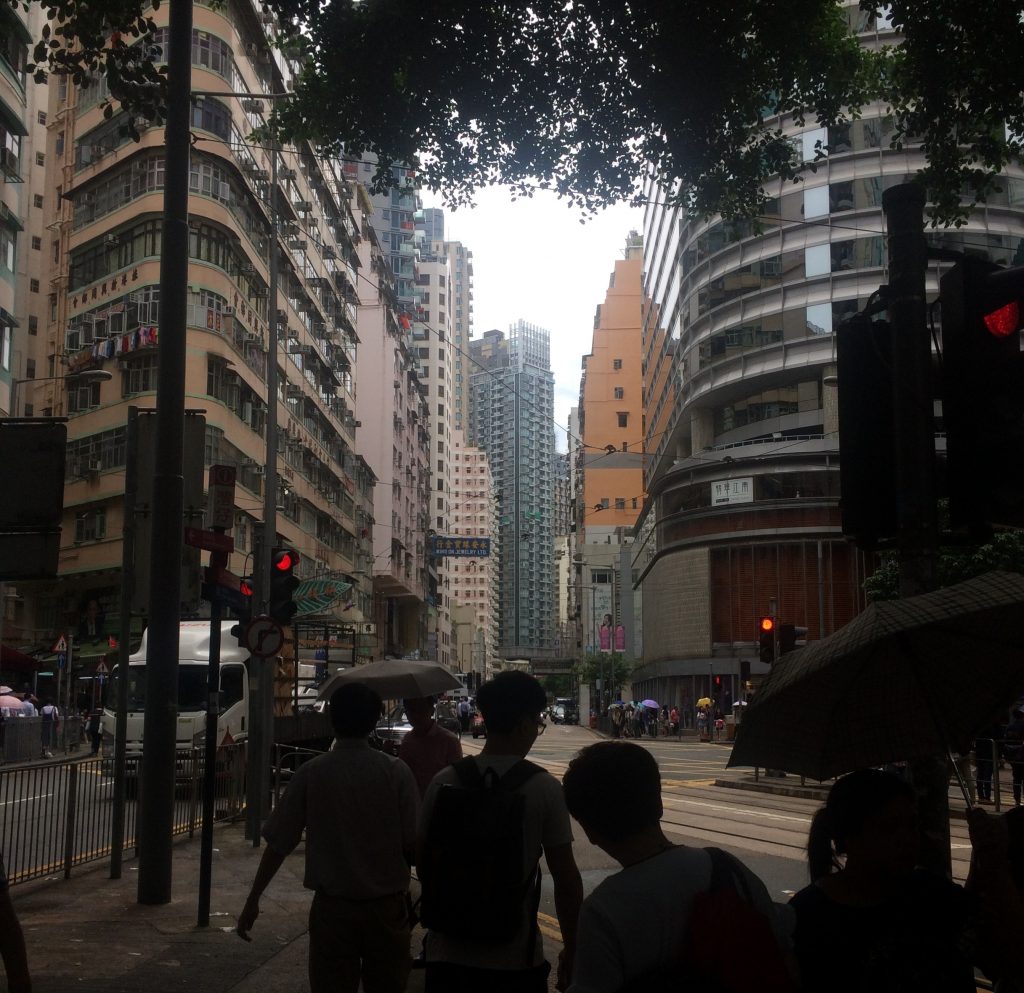 I think I spent about $1,300 over the 5 days including flights, airBNB, and sightseeing.  If you avoided the nightlife you could probably do the same trip for nearly 3 quarters of that cost. 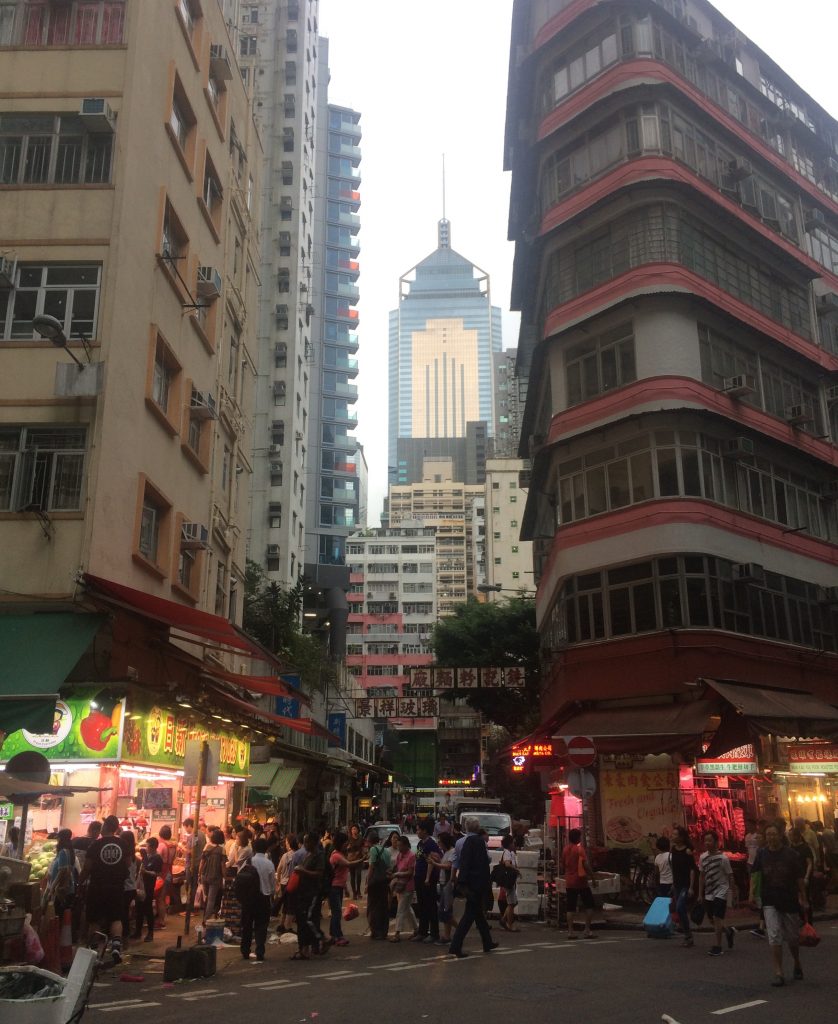 Have you been to Hong Kong?  I would love to hear about your experiences!  Or if you’re thinking of planning a trip comment below and I can send you some recommendations.